(CNN )If you have children's Advil in your medicine cabinet, check the bottle.

Pfizer, which makes the children's fever reducer and pain reliever, issued a voluntary recall of 4-ounce bottles of the bubble gum-flavored liquid.

The recall was issued after customer complaints identified that the dosage cup provided is marked in teaspoons while the instructions on the label are given in milliliters (mL). 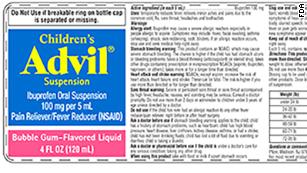 Consumers should discontinue use of recalled children's Advil.
"Pfizer concluded that the use of the product with an unmatched dosage cup marked in teaspoons rather than milliliters has a chance of being associated with potential overdose," the company said in its announcement.
Ibuprofen is the active ingredient. Symptoms of an overdose of this medication may include dizziness, drowsiness, vomiting, nausea, headache and blurred vision.
A 2016 study found that 80% of caregivers made an error when dispensing medicine, and the most common mistake was measuring too much of the medicine.
The researchers found that using oral syringes rather than cups reduces those errors.
"When parents used dosing cups, they had four times the odds of making a dosing error, compared to when they used an oral syringe," said Dr. Shonna Yin, an associate professor at NYU Medical School who co-authored that study.
The recall affects one lot, R51129, which was distributed to retailers, wholesalers and distributors across the country between May and June. The expiration date of the recalled medicine is November 2020, and the UPC code is 3-0573-0207-30-0. The NDC code is 0573-0207-30.
Consumers should discontinue use of the medication, Pfizer said, and retailers should not sell it.
Anyone who has experienced a problem from this medication should contact their care provider or report it to the US Food and Drug Administration.

Poison Prevention Tips from the American Academy of Pediatrics

Each year, approximately 3 million people – many under age 5 – swallow or have contact with a poisonous substance. The American Academy of Pediatrics offers tips in both English and Spanish to prevent and to treat exposures to poison. Please feel free to excerpt these tips or use them in their entirety for any print, online or broadcast story, with acknowledgement of source.

To prevent poisoning in your home:

Most poisonings occur when parents or caregivers are home but not paying attention. The most dangerous potential poisons are medicines, cleaning products, liquid nicotine, antifreeze, windshield wiper fluid, pesticides, furniture polish, gasoline, kerosene and lamp oil. Be especially vigilant when there is a change in routine. Holidays, visits to and from grandparents' homes, and other special events may bring greater risk of poisoning if the usual safeguards are defeated or not in place.

Poison Treatment Tips from the American Academy of Pediatrics

If your child is unconscious, not breathing, or having convulsions or seizures due to poison contact or ingestion, call 911 or your local emergency number immediately. If your child has come in contact with poison and has mild or no symptoms, call Poison help at 1-800-222-1222.

Poisonous fumes – Take the child outside or into fresh air immediately. If the child has stopped breathing, start cardiopulmonary resuscitation (CPR) and do not stop until the child breathes on his or her own, or until someone can take over.